The Niagara experience is a mix of emotions.  The most beautiful and powerful sight in eastern Canada is cursed with the worst of what tourism has to offer.  Rather than rectify this, the businesses seem to try and outdo each other with an increasing level of crass commercialization and an attitude of giving every customer less than what they bargained for.

Ah, yes, the Clifton Hill district.  An assemblage of Ripleys attractions, wax museums, haunted houses, and arcades seeking to prove Barnum’s point.  You pay $10 or $20 per attraction and are entertained for half an hour.  This is why I never complain about Disney World: you may pay $100 to enter, but you only pay it once and can enjoy all attractions over and over again.  You feel like you got your money’s worth and that the workers cared about your experience. 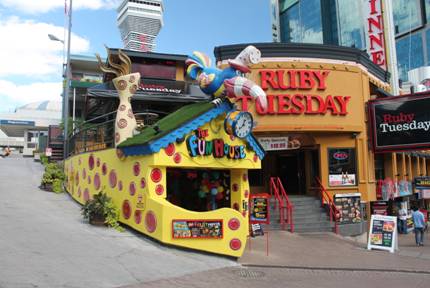 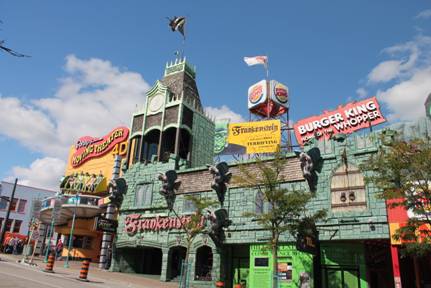 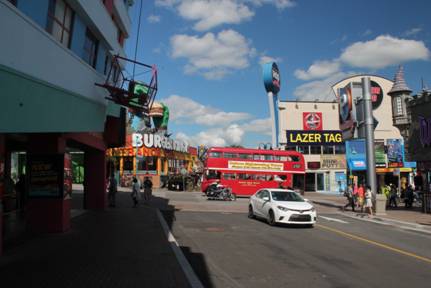 With the exception of the falls themselves – which are free to enjoy – Niagara makes nearly every experience an overpriced unsatisfying test of visitors’ patience.  The coin collecting experience is no different.  So let’s get to the penny presses.

Penny collectors in Canada are cursed by two developments: the elimination of the penny as cash money, and the fluctuating exchange rate that prompts Canadian retailers to maximize prices (even when the dollars are at par).  This has resulted in the $1 price point, and the parallel development of three machine options (all found in Niagara Falls).

This has the potential to be an attractive option.  At Disney World, 8- and 12-die machines have been added in recent years. Those machines supply the pennies – in Disney’s case, new uncirculated zinc pennies.  It’s not a great alternative for those of us who strongly prefer to press copper pennies, but it’s an economical solution and avoids having guests wait in line for cashiers to search for shiny coins.

At Niagara, this option is botched.  Rather than do what would benefit collectors, they take the easy route: stock the machines with whatever U.S. pennies they can get from the banks on the American side of the river.  This means circulated cents, often in terrible condition.  If you get a nicer penny, it is through sheer luck, and not because the machine’s vendor cared what you received.  A consistent guest experience seldom depends on luck.

Option #2: the machine switches to a different coin, such as nickels, supplied by the customer

This is the option employed at Bird Kingdom.  There, the machine takes nickels – and it does a good job.  The nickel gives a better surface for the artwork.  The silver color makes the designs stand out better, and the surface of the nickel is slightly larger – like painting on a larger canvas.  In addition, even well-circulated nickels, dimes or quarters look pretty good – unlike pennies.

The token option was tried briefly at Disneyland; arcade tokens were used instead of pennies at three machines.  This created a unique option, and could have been profitable for Disney (since tokens cost 25 cents each).  The experiment was abandoned only because the tokens were too hard and were wearing down the dies.

At Niagara, tokens have been introduced.  In one of the few signs of customer-focused practices, these tokens are distributed free of charge.  Two methods are used at Niagara: either the machine automatically dispenses the token (Souvenir City; also at the Welland Canals Centre in nearby St. Catharines), or the tokens are distributed by nearby change machines (Rainforest Café and Great Wolf Lodge) and the customer inserts them in the press.

Some collector websites encourage you to bring your own pennies to press in the token presses.  That would be a mistake.  Some machines do not allow you to insert your own coin (Souvenir City, Welland Canal).  Others allow you to insert your own coin but are not set up for pennies.  The machines accepting tokens are specifically calibrated to press the tokens.  If you try to use a penny instead, it will roll extremely short (even the coin feed is set up to reject pennies as undersized, but many of us know how to manipulate the slide to accept slightly undersized coins).  The photo below illustrates the results. 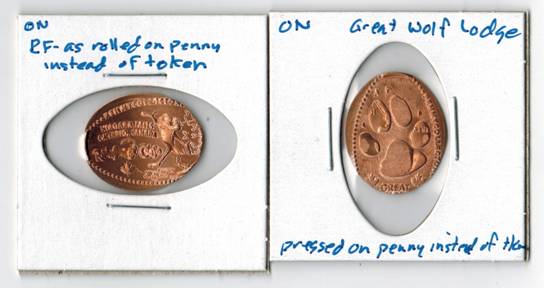 A penny rolls woefully short because the tokens are slightly larger than a penny, as shown here: 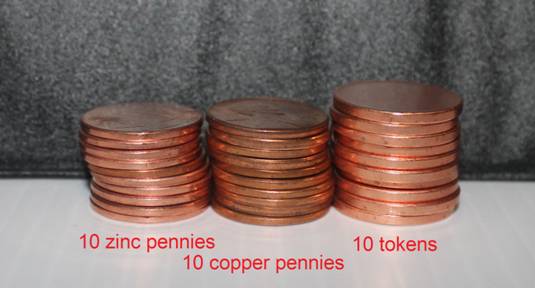 So what’s inside the token?  I have seen it described as a copper token, or as a zinc token.  I peeled one open, and it appears to be zinc with a copper coating (it is non-magnetic, so not coated steel).  The copper coating is slightly thicker than on a penny.  When you press coins using these tokens, you can observe under magnification that some of the copper rubs away in waves and the zinc shows through.  It is not as bad as modern zinc pennies, but it is visible. 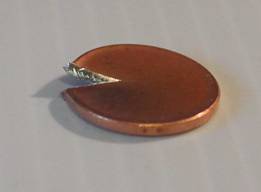 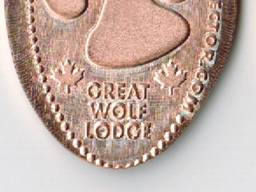 Can you use the tokens on other machines?  No – they are too thick and large for penny machines, and too small for nickel machines.

The price of a penny

The presses in Niagara uniformly cost a dollar to press your coin.  Some coins accept quarters through a parallel coin mechanism; all accept loonies (Canadian dollar coins) except the Butterfly Conservatory’s café building machine (4 quarters only) and possibly the Floral Clock machine (the gift shop was closed for the season when I visited, so the machine was not available).  There are change machines that will convert your $5 bill to loonies (and dispense tokens for no additional cost) at Rainforest Café and Great Wolf Lodge.  There is also a change machine outside a shooting gallery on Clifton Hill, but it dispenses a variety of quarters, loonies, and twonies.  It accepts currency up to a $20 bill.  There are also change machines in the arcades on Clifton Hill, but they all seem to dispense arcade tokens for use on their machines.  (Arcade token collectors will find a variety of tokens along Clifton Hill, some with Canadian themes.) 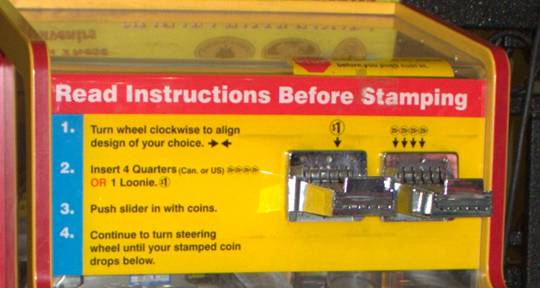 Machines constantly change; businesses close, and the machines get retired or relocated

I sometimes think there are only ten machines in Niagara and they get rotated to forty locations.

The simple truth is that Niagara Falls is the home to many failing businesses.  Not treating the customer right has consequences, and one consequence is that businesses fail all the time in that community.

Since the machines are typically owned by a vendor (instead of the business itself), those machines are moved around as needed.  This also means collectors should keep their eyes open, as a retired machine may pop up in a previously undisclosed location (I accidentally found a machine – I was on the upper level of the Grand View plaza, looked down at a public performer on the lower level, and spied a machine in the doorway of a gift shop).

The lack of a good business model also means that machines are frequently out of order.  Do not expect to visit Niagara Falls and use every single machine.  User reports indicate that machines take weeks or months to repair; sometime the machines are left in place, and other times they are removed pending repairs.

Finally, while the falls themselves are open 24/7/365.25, some business in the falls area are seasonal.  As a result, a few machines will be unavailable from shortly after Labour Day/Labor Day through Victoria Day/Memorial Day.  (I visited the Floral Clock on October 25 and the gift shop was closed for the season).  Check websites ahead of time to verify dates and hours of operation.

1.  Do not expect to find every machine operable or where it should be.

2.  Keep an eye out for new locations of retired machines.

3.  Bring loonies.  If you can’t stop at a Canadian bank (where they come in rolls of 25 – but don’t expect to find banks in Niagara’s tourist areas), plan to hit the Rainforest Café or Great Wolf Lodge early to use their change machines (which take $5 bills).  Keep a few of the blank tokens as a novelty; your goal here is to get enough loonies to finance your rolling for the rest of the day.  I have found only one machine that does not accept loonies: the machine in the Café Building at Butterfly Conservatory (it takes 4 quarters instead).

4.  Don’t bring a lot of your own pennies.  Only one machine at the Butterfly Conservatory north of town accepts customer-supplied pennies.  Bring or buy nickels for the Bird Kingdom machine, though.

5.  If you have lots of time to spend, park in a single location and consider taking the WeGO bus.

All opinions expressed here are mine, but not necessarily mine alone.  jnm